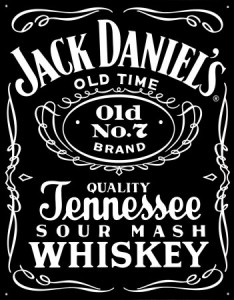 It is one of the most famous brands of whiskey and loved the world, this is due to its classic presentation and that despite its high alcohol has a delicate taste and unique. The musical story relates directly to this Tennessee whiskey blues and rock’n roll, was the favorite drink of Frank Sinatra and many other idols of the music world as the Rolling Stones.

Founded in Lynchburg Tennessee, United States in 1866. Many confuse this with the Bourbon whiskey because its distillation method is almost identical, the difference lies in the filtrate in the case of Jack Daniel’s is in sugar maple charcoal, which gives it its aroma and flavor of the brand.

Nobody knows the exact date of the birth of its founder Jasper Newton “Jack” Daniel, but it would be between 1846 and 1850, it would pass away in 1911 because of a foot infection from a wound product because of him kicking your safe unable to open it.

Four years before his death in 1907, he gave the distillery to his nephew, Lem Motlow. He had charge of the accounts of the distillery to have knack for numbers and also be the favorite nephew of Jack Daniel, who never married or had children welcomed him as the son he never had.

In 1957 the company bought the Brown-Forman distillery in Lynchburg, Tennessee.

Initially the bottleneck presented in two formats: the classic rectangular bottle with black label with an alcoholic strength of 45% and with a green label to indicate a 43% alcohol. Since 2004 was reduced to 40% alcohol which would facilitate the production process to be the maximum allowable graduation in several jurisdictions.

Recently launched the “Gentleman Jack” (Jack Knight), whiskey produced in the same manner as other distillery products but with additional filtering once the aging process, this filtering is known as “Lincoln County Process” . 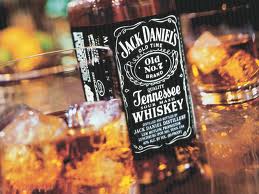 One legend holds that the number 7 referred to the number of a shipment by rail, where the barrels had been marked by the number 7. Another legend that the seventh Jack recipe would be tested by preparing the current definitive Jack Daniels that consume far. Then there is room for some other stories such as that 7 corresponded to the number of brides who had Jack or was referring to the way that he had to write the letter “J”, which was confused with a 7.

There are many versions and stories from various sources, but the fact is that Jack Daniel took that secret to the grave. 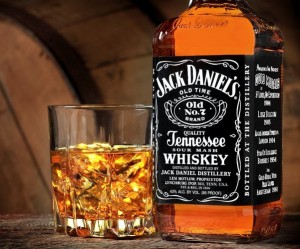 The color, body and flavor of Jack Daniels is due to a thorough process that makes it unique. The whiskey is made with ground water taken from a cave in Tennessee, and the whiskey is subjected to a process called “charcoal mellowing” consisting of filtration through sugar maple charcoal making it what it is: a Tennessee whiskey and not a bourbon liqueur which is confused by its softness despite its high alcohol. Finally the whiskey is aged in white oak barrels that are assembled by hand and burned inside to melt sugars own timber and give the Jack Daniels flavor and amber.