The Queen of England launches aircraft carrier with Whisky

The Queen II of England has decided to replace the traditional champagne for Scotch whiskey to christen the new Royal Navy aircraft carrier, which bear his name. The event will be held next Friday in Scotland. The “HMS Queen Elizabeth” will be baptized in the town of Rosyth, which is located in the south of Scotland, although it will not be operational until 2020. “Workers around the UK have helped build the ship, but as the celebration will be held in Scotland is suitable baptize with whiskey, the “water of life”, “explained the British government in a statement. 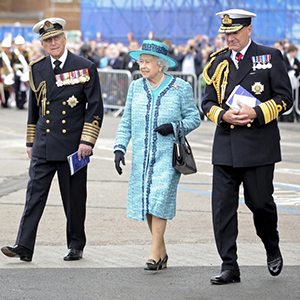 Queen Elizabeth chooses a bottle of whiskey to break against the hull is a pure malt distillery Bowmore, Islay, this is one of the hybrid islands located west of Scotland. In full campaign for Scottish independence referendum, to be held on September 18, the British government has decided to multiply the messages and winks to encourage the Scots stay. “The ship is the largest that has had the Royal Navy, is a sample of the UK with the contribution of each Union workers” explained Defence Minister Philip Hammond said in the statement. The JMS Queen Elizabeth will be a vessel weighed 55,000 tons to retransmit a significant lack of the Royal Navy, which currently has no aircraft carriers. The tradition of naming ships with champagne is not so old, in fact at the time of Admiral Horatio Nelson (1758-1805) the Royal Navy chose brandy or Madeira wine, and beer submarines normally used. No clutch, it is only the second time the Royal Navy of the United Kingdom uses Whisky. The first time was in 1996 with the frigate “HMS Suthreland a” braco with many connections with Scotland that even its name is a tribute to a Scottish duke.

Following the success obtained by Bowmore last year, they have decided to release in the …